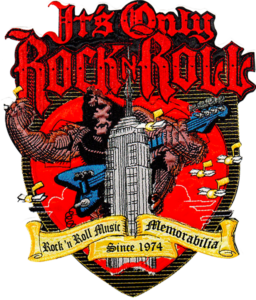 Our fantastic design created by the incredible Rick Griffin  ,King  Kong  hanging from New York City’s Empire State building  along with electric V -Guitars flying around .
What a great time we were so lucky to spend with him
Bio :
Rick Griffin grew up in the surfing culture of Southern California, a milieu which had a profound influence on his art. After high school, he worked on the staff of Surfer magazine and created the best-known surfing cartoon character of the time, Murphy. After his move to San Francisco in 1967, be began combining eclectic typefaces and decorative borders with brilliant colors in his concert posters. Griffin’s compositions were complex without being illegible. A perfectionist, Griffin often applied dozens of overlays and redrew lettering again and again until he was satisfied. In the early 1970s, Griffin became a born-again Christian and religious themes dominated his work until his death in a motorcycle accident in 1991